What is the correct transparent color for task pane icons?

I’m updating SolidDna so it supports modern APIs for icons. According to the docs, task pane icons need 192-192-192 gray for transparency. That’s clearly no longer the case: 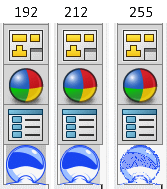 192 gray is not replaced at all. The background for the other icons is 212 gray, but that also doesn’t work. So I tried 255 white, which seems to work. But that fucks up the image for some reason.

Does anybody know the proper way to supply these image?

I have saved my images as 8-bit, so 255 colors. The result is the same for PNG and BMP.

I used Gimp to create my ico and png resource files with a transparent alpha layer and it works well. I’m not sure what it physically does to make transparency but it’s always worked for me.

I hadn’t even considered that option

Thanks @BigCrazyAl, that works for PNGs.

At least I’ve found two bugs and reported them. We’ll see what they’ll have to say about BMPs.

@BigCrazyAl killing it as usual